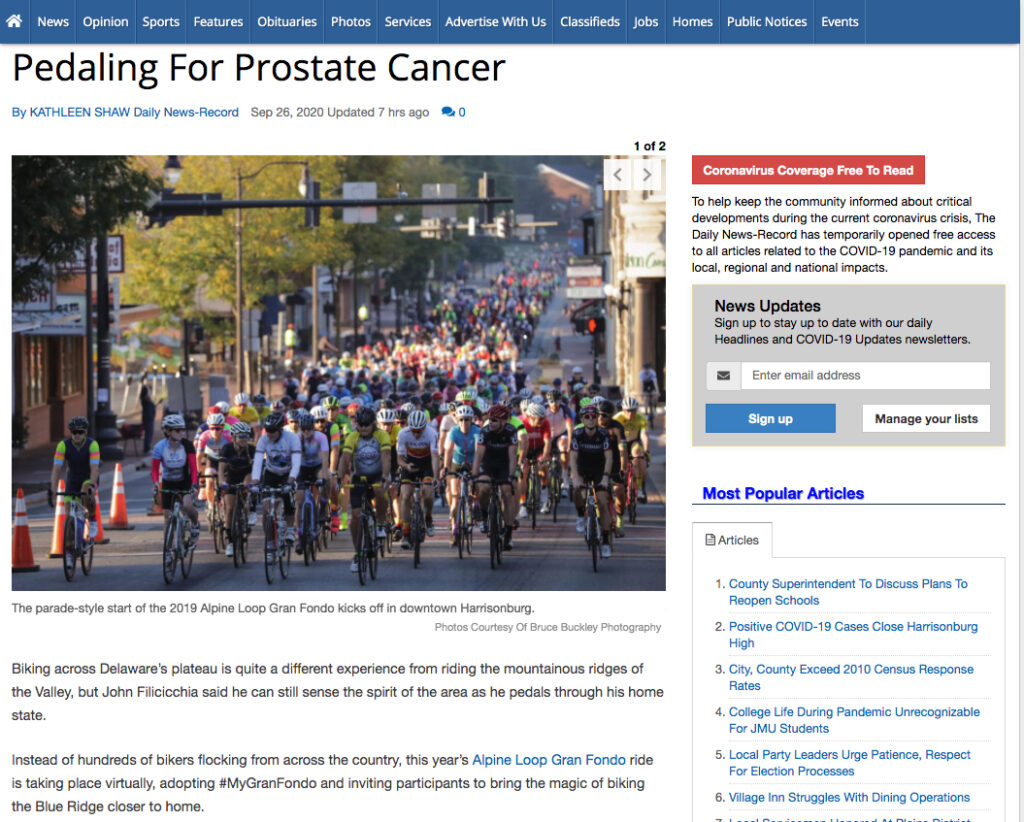 Jeremiah Bishop began the local gran fondo ride, which means “great challenge” in Italian, back in 2011 as a fun way to corral the community outside, with proceeds reinvested in local organizations such as the Shenandoah Valley Bicycle Coalition. Since then, the event has continued promoting regional community endeavors and evolved into an awareness and fundraising campaign for Cancer Journeys Foundation.

September is Prostate Cancer Awareness Month, and the 2020 ride has stretched across the entirety of the month for a collective goal of riding 33,000 miles in honor of the 33,000 lives annually claimed by prostate cancer in the U.S.

To manifest the same camaraderie of years past, the organizers developed an exclusive Strava club where over 200 participants update and motivate each other as they endure challenging distances.

“It has become a euphemism for the journey people go through as they fight and hopefully conquer their cancer,” Bishop said. “It’s neat to see how it’s affected people and really given them something to connect with, and it’s that connection; it’s grown into something much bigger than someone riding their bike.”

Bishop’s wife, Erin, is the event director and has worked through Strava to offer workouts, guidance and track the leaderboards to award Prostate Cancer Awareness Project King and Queen of the Mountains and Sprint contests. She said some participants are also using the platform to share stories of how prostate cancer has touched their lives.

“For event day this year we’ve really focused on telling the story of our participants, sharing in the lead-up, sharing and being committed to cycling goals,” Erin Bishop said. “It’s been a more intimate way of being involved with them by sharing their workouts or sharing their stories.”

On Sunday, participants will share in the adventure of decentralized real-world rides with several suggested routes mapped in areas where event riders reside, and Jeremiah Bishop is offering guidance on how to create routes independently if riders are isolated from identified areas.

Filicicchia, who has been an avid biker since the mid-1980s, participated in the past two Alpine Loop Gran Fondo rides and said the event inspired him to take control of his health.

“I was overweight, stressed from the high school administrator job, I wasn’t taking care of myself, but I’ve paid attention to this. I dropped 50 pounds in weight,” Filicicchia said.

This year, he has mapped out a 110-mile route starting in Pennsylvania, through Maryland and ending in Delaware for the weekend.

“Even though we’re not all together, it feels like we are because we have all these social media updates and we get emails all the time and we’ve got a big group on Strava that’s always pushing us to get those miles in,” he said. “It’s like we’re all together but in a different way.”

Robert Hess, founder and president of Cancer Journeys Foundation, said the event has raised approximately $60,000 over the years, but its greatest accomplishment is raising awareness of prostate cancer. Hess said he knew 23 men who have detected their prostate cancer as a result of attending the gran fondo race.

With the proceeds from the race, Cancer Journeys Foundation has developed and maintained the ProstateTrackerApp so people can detect and promote early detection anonymously and for free.

“Even more important than the money is the awareness and conversation that takes place around prostate cancer because men are reluctant to talk about it,” Hess said. “It’s just a great way for us to reach people, get the word out, get people using the tool and learning about health and bicycling and keeping fit and preventing disease.”

According to the Centers for Disease Control and Prevention, prostate cancer is the most common cancer among men in the U.S., apart from non-melanoma skin cancer, and it accounted for 19.8% of cancer deaths for Virginian men in 2017, second to lung and bronchus cancer.

On Sunday morning at 8 a.m., virtual start line sendoffs will be shared on Facebook and Instagram. At 6 p.m., Jeremiah Bishop will go live for a toast and ceremonial ringing of the giant Swiss Glocken on behalf of 2020 Alpine Loop Gran Fondo participants.

To read more about the ride, go to https://alpineloopgranfondo.com/.

Just over 500 cyclists had the adventure of their lives riding the 9th edition of the Alpine Loop Gran Fondo from Harrisonburg, Virginia in the beautiful Shenandoah Valley into West Virginia and back raising awareness for prostate cancer.

38 men and women earned a coveted King and Queen of the Mountain cycling jersey in their age categories. Click on the image below for full details. 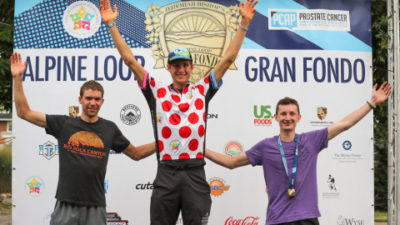 “Cyclists love a challenge and the Alpine Loop Gran Fondo weekend has four routes that provide challenges for cyclists at all skill levels,” said Robert Hess, founder and president of the Cancer Journeys Foundation, as well as an experienced long-distance cyclist.

Read the full press release at the link below . . .

“It’s the start of Cancer Prevention Month and we’re excited to join other health organizations to help individuals make the healthy lifestyle changes that can lower their cancer risk,” said Hess. “About half – 50% – of the most common US cancer cases are preventable. The recipe is simple: eat well, be a healthy weight, be active, and stop smoking.”

According to Hess, “How much you move is important and just 30 minutes of activity every day is enough to matter for #cancerprevention. I set a timer and take a short walking break every 25 minutes. My daily goal is that magic 10,000 steps.”

The simplest and easiest way to exercise is walking. Everyone can do it.

The American Institute for Cancer Research has created an easy 30-day checklist for reducing cancer risk. The checklist is available for download at – 30-Day Checklist. 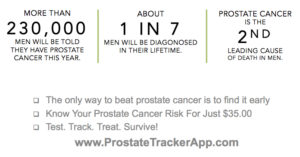 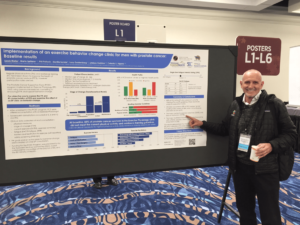